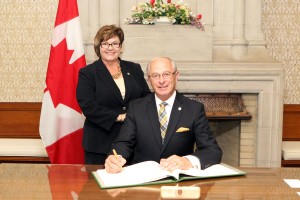 Watch the video clip below for a quick look at the Swearing In Ceremony. This is an important process as explained in the Compendium of House of Commons Procedure :

Before a duly elected Member may take his or her seat and vote in the House of Commons, the Member must take an oath or make a solemn affirmation of allegiance or loyalty to the Sovereign and sign the Test Roll (a book whose pages are headed by the text of the oath or affirmation). When a Member swears or solemnly affirms allegiance to the Queen as Sovereign of Canada, he or she is also swearing or solemnly affirming allegiance to the institutions the Queen represents, including the concept of democracy and the democratic institution of Parliament. The obligation for Members to take the oath is found in the Constitution Act, 1867.

Full house to thank Vance Blackmore as Warden of Middlesex Cty in Glencoe for job well done in 2015. Thx to his wonderful wife Cathy also

@BelindaBowman_ Fair enough. I'd be quite certain @MayorToddCase has covered all the bases w @MonteMcNaughton TYVM for the info